One of the most cherished paper items in my collection of ephemera is a signed concert schedule from a Houston club called the Mucky Duck. The featured event for the month of January, 2001, includes a full page cover photo of the band appearing Friday, January 26: Levon Helm and the Barnburners. And I got to meet Levon Helm that night and get his signature on this item. 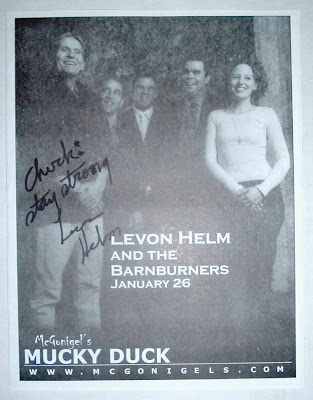 Levon Helm died yesterday afternoon at age 71. We lost a legendary artist and true American music icon. I'm remembering him today through both times I got to see him perform live--with the Barnburners in 2001 and earlier in 1996 with The Band, a reunited version without Robbie Robertson and Richard Manuel. I'm also remembering him through the wonderful music he made with Ronnie Hawkins and the Hawks, The Band, and his more recent Grammy Award-winning albums.

My friend,  Fred O'Brien, had been corresponding with the band's road manager about this event and got an invitation for us to meet Levon Helm between sets. That meeting took place in the club's kitchen where some of the band members gathered for a quick bite and drink before heading back onstage. Levon was still recovering from throat cancer and could not talk, but he was nonetheless very expressive. He didn't sing that night either, but his Rock and Roll Hall of Fame drumming, energy, and passion were on full display that night as the Barnburners ripped through a bluesy rock set that got the crowd on its feet.

Back in the kitchen, we chatted briefly with Levon, met his daughter Amy (she was in the band and also featured on the calendar above), and I got a picture of Levon and Fred. In our excitement over meeting this iconic musician and singer, we forgot to trade places and get my picture with Levon. No regrets, just being there in that space with an American music legend was good enough for me. That and getting his autograph makes this paper matter to me.