Here's a timely piece of ephemera for all the snow the winter of 2011 has produced. It's an 1897 billhead from a New York company that made, among other things, snow-guards for tin and slate roofs--Dugan's Patent Snow-Guards.

M. Halliday was the proprietor of the roofing company at 281 East Ninth Street, between Second and Third Avenue. Snow guards on sloped roofs help prevent damage from sudden avalanches of accumulated rooftop snow.

This job was billed to the Department of Public Charities for work done at Bellevue Hospital. 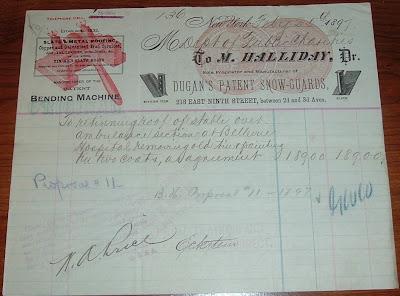 Charles G. Halliday has bought out the business of his father, M. Halliday, 218 East Ninth street, New York City, and will continue the business of practical Slate and Metal roofer and manufacturer of Dugan's Patent Snow Guards for slate and other slanting roofs, cornices, &c.

I don't know how long Halliday stayed in business, but the historic Bellevue Hospital is still around. Well known as a psychiatric hospital, Bellevue is the oldest public hospital in the United States, having been established in 1736. But if Halliday were, or is, still around, their snow guards for a job at Bellevue might look like those shown in some of the images HERE.
Posted by Chuck Whiting at Monday, February 21, 2011