Here's an interesting unused billhead in a recently acquired pile of old paper. The Harrison Coal Company in Boston sold wood as well as coal for heating fuel, according to the billhead. 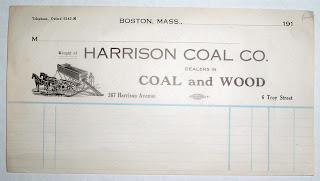 But the interesting thing about this billhead is the graphic depicting the delivery method. A large coal wagon with a team of two horses is delivering its product down a chute out the backside of the wagon. The chute runs down to what looks like an open manhole with the cover removed to the side. 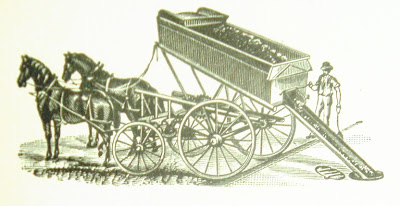 To find out exactly what was going on here, I researched coal delivery methods via chute and quickly found an answer on an intriguing blog called Vernacular Typography, which collects examples of local history through images of lettering on old signs, buildings, and the like.

In a post about old manhole and chute covers on Willow Street in Brooklyn, I found the history I was looking for to match the image on my billhead. What looked like a manhole was actually a chute, usually located in close proximity to a home, i.e. the sidewalk or in the yard next to the basement. Coal could be shoveled down the chute, which would deliver it to the homeowner's basement to be used as needed in the furnace. More on these chutes was found on the equally interesting blog, PolyBloggimous, which also features Brooklyn chutes, coincidentally.

The date on this billhead is printed with the prefix 191__, so this transaction falls somewhere from 1910 to 1919. Though trucks were certainly being used in the early part of that century for various jobs, many neighborhood delivery services were still performed with horse(s) and wagon during the early decades of the 20th century.

The Madison-Jefferson County Public Library has an image online that depicts a coal wagon with two horses still being used in 1927--the last coal wagon still in use at that time in Madison, Indiana. There is a striking similarity to the graphic on the billhead. 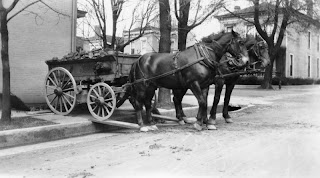 As for any history on the Harrison Coal Company, information barely exists on the Internet to document this old company with the interesting Boston billhead. But Boston was likely one of many satellite offices set up where demand for coal warranted a business presence. So where was Harrison headquartered?

Maybe Harrison County, Ohio was where the company called home. In the late 19th century, large coal deposits were discovered in Harrison County, providing a dramatic turn in local history. And even if this is not where Harrison Coal Company mined its coal and shipped it to Boston, Brooklyn and other places, there is interesting history there. 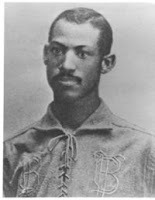 General George Armstrong Custer was born there and the county also lays claim to the first African American Major League baseball player. And you thought it was Jackie Robinson (so did I). Nope. Read about Moses Fleet Walker (pictured left), who played for the Toledo Blue Stockings in 1883.

Prior to the discovery of coal in Harrison County, Ohio, the history referenced above has nothing to do with Harrison Coal Company and Harrison County itself may not either. But these are just some of the never-ending paper trails a piece of ephemera can lead one down.
Posted by Chuck Whiting at Wednesday, March 14, 2012