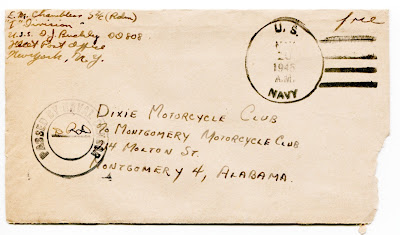 World War II. It's May 9, 1945 and a U.S. Navy sailor aboard the U.S.S. Buckley hunting German subs lets his mind drift back home to Alabama and his friends who have formed a motorcycle club in Selma.

Seaman 2nd Class Ed Chambless yearns to be back in the states riding his motorcycle with "the fellows," but first, he writes, "I've got to broadslide right smack into the middle of Tokoyo then I'll be at the head of the line more than likely with that O.H.V. hung up in third gear"

Chambless may have thought his ship would be in on the invasion of Japan, but according to Dictionary of American Naval Fighting Ships, U.S.S. Buckley "operated on anti-submarine and convoy escort duty along the eastern seaboard and in the North Atlantic until June 1945. During this period Buckley and Reuben James (DE-153) sank the German submarine U-879 on 19 April 1945. Buckley escorted one more convoy to Algeria during June-July 1945 and upon her return to the east coast commenced conversion to a picket ship."

Operation Downfall, the allied invasion of Japan had been in the planning stages that year and maybe rumors swirled onboard the Buckley about their involvement. Even if they had been in included in the inasion plans, the war ended after the U.S. dropped atomic bombs on Hiroshima and Nagasaki in August 1945 and the Japanese finally surrendered.

Back to May of  that year, we find the Buckley on escort duty along the east coast of the U.S. and North Atlantic. During this time, Chambless got a copy of the American Motorcyle (AMA) News and read about the Dixie Motorcycle Club. They formed in Selma, Alabama earlier that year, apparently, with 24 members.

Chambless was excited to hear about it, wrote to the members, and sent the letter in care of the  Montgomery club. He wished he had been there with them and looked forward to the day when he could join them on some motorcycle rides. He also reminisced about some fun times they'd had in the past.