A ticket to remember... Eat 'Em Up Coogs!

This past weekend, the University of Houston (my alma mater) Cougars routed their cross-town rivals, the Rice Owls, 73 to 34. Quarterback Case Keenum broke another NCAA passing record (he threw nine touchdown passes in this game... NINE!) and is in the running for the Heisman Trophy. Makes Cougar fans want to shout the team's traditional rallying cry, Eat 'em up Coogs!

There is a precedent for the Cougars winning a lopsided victory such as this. In 1968, they annihilated the University of Tulsa 100 to 6 and I was there. Even at age 12, I sensed the history of the ticket stub I held (the sentimental value kicked in later) and I wrote the score on it. I already collected baseball and football cards--why not game tickets? 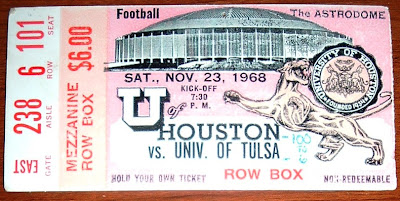 My dad, also a UH-alum, took my brother and I to our first college football game that night and it was a doozy indoors at the still pretty-new Astrodome. The 1968 Cougars may not have had any Heisman hopefuls, but they had a solid team with several players going in the NFL draft the following year. Also on that 1968 roster was a future country singer--Larry Gatlin. Their longtime coach, Bill Yeoman, would make it to the College Football Hall of Fame in 2001.

Just the week before the 100-6 embarrassment, the Cougars pounded Idaho 77 to 3. Their season opener set the tone it would appear with 54 to 7 victory over Tulane. They went on to win six games, losing two, and just to make it a really strange year, they tied two games. Their 1968 record: 6-2-2.