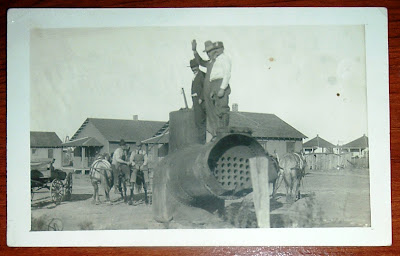 In a pile of postcards and other ephemera from an estate sale in Houston, I recently found this real photo postcard (RPPC) of a scene that has me baffled. And so I bought the postcard. 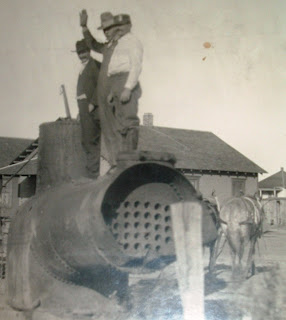 Three men are standing on a large pipe-like piece of equipment. Two teams of horses are in the background, one of which has a couple of men sitting on a makeshift platform harnessed to the horses. One of the men is holding on to a rope or cable that seems tethered to the equipment. The horses have been used to move this heavy object. 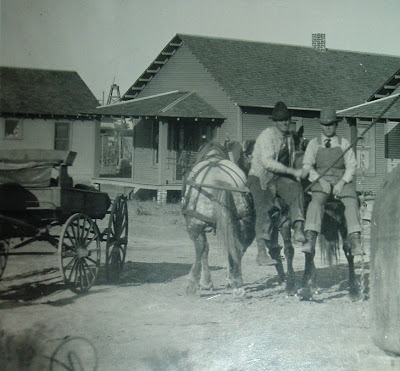 The western clothes, horses and wagon (far left side of the postcard) beckon the Old West, but the setting appears to be a neighborhood, not a ranch. Perhaps an old Houston neighborhood or a nearby town? Between the two houses on the left, you can barely make out what looks like an oil derrick in the background.

The back of the postcard offers a few names, which doesn't help identify the action in the scene. But the divided back offers a clue as to the age. Starting in 1907, postcards were allowed to have writing on the back other than the address and the divided back was born. Prior to that year, a message to the recipient could only appear on the front. 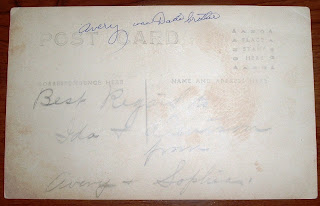 Could this mystery object be a piece of oilfield equipment? Maybe something to do with sewage? Whatever it is, the whole scene seems to offer snapshot in time when the ways of the Old West were giving in to a new century and technology. The juxtaposition of old and new are striking and that's what really attracted me to this image. Even if I don't know what I'm looking at! 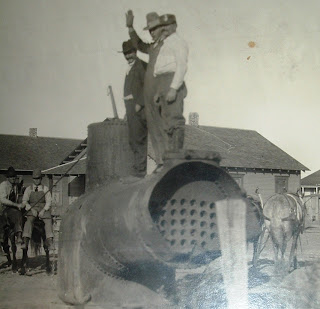