How about a bicycle to go with that rifle? 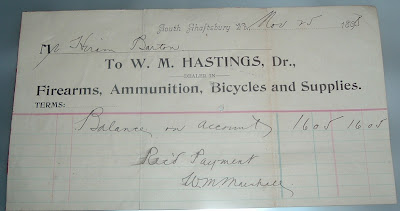 Former Town Clerk, Hiram Barton, had no need for either the day this billhead was prepared. He merely stopped by to pay the balance on his account. Could that balance have been for a bicycle? A gun?

W.M. Hastings of South Shaftsbury, Vermont was the man to see for all your gun, ammo, and bicycle needs back in 1898. Seems like an odd association today, perhaps not so much back then. He also sold "other supplies," so maybe there was a little something for everyone.

But was this a firearms and ammunition store that also sold bicycles or was it a bicycle shop that happened to also sell guns and ammo?

I think the former. Until the 1890s, bicycles enjoyed no popularity among the masses--they were toys of the well-to-do. That changed in the 1890s with a revolutionary design that made the bicycle safe and accessible for all. And probably something for which a firearms and ammunition shop could make extra cash by having a few stocked on the side.

Telegram: Getting remarried in El Paso

Back in the "old days"... Before there was an Internet and email and before telephone service became popular enough and long distance calls became cheap enough, the best technology for delivering messages was via the telegram, such as this one below. 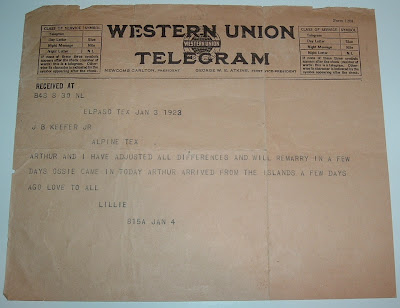 Here is a 1923 Western Union telegram from El Paso, Texas to Alpine, Texas, with the happy news that Arthur and Lillie had "adjusted all differences" and would remarry in a few days. That phrasing makes me wonder if the couple actually resolved all their differences or merely made some adjustments to accommodate them. The tone and wording make me suspicious of the second time around being the charm for these two.

From Retro-Gram.com, here's how Lillie would have gone about wiring the good news to friends or relatives in Alpine:

"People sent telegrams by calling a telegraph office and dictating a message over the phone to an operator: the cost of the service was added to the customer’s phone bill. Customers could also appear in person at a telegraph office and write their message on a blank form, which would then be rendered into Morse code. Telegraph companies supplied pads of blank forms to business customers, and messenger boys would carry the forms to the telegraph office throughout the business day. Full-rate telegrams were hand-delivered by a company courier, but some cheaper services featured telegrams that were delivered by mail. In some European cities telegrams were also delivered via pneumatic tubes."

Telegrams likely outlasted Lillie and Arthur, finally succumbing 83 years later to the Internet Age and lack of demand. In 2006, the wires were metaphorically cut and telegram service died. The announcement came over the Internet. Ironic. Stop.

The obituary for the venerable old service, as well as a part of American culture, was reported in various newspapers and online venues. They're not hard to find. Click HERE for one example.
Posted by Chuck Whiting at Sunday, August 29, 2010 No comments:

Email ThisBlogThis!Share to TwitterShare to FacebookShare to Pinterest
Labels: telegrams

Crossposting from Bibliophemera, this ephemeral piece of paper seemed a natural fit for this blog, too. 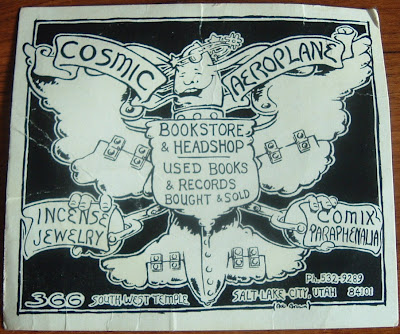 Here's a relic from those heady (pun intended) counterculture days of the 1960s-70s when headshops appeared on the scene. I remember one close to where I grew up that was called a record shop, but it was a headshop, too. As a teenager circa 1969-1972, my memories of that place were incense, paraphernalia that had nothing to do with music (or perhaps it did in an enhancement kind of way), hippie-looking staff and patrons, and some really cool records. I got introduced to the music of Townes Van Zandt there with his 1972 album, The Late Great Townes Van Zandt. But I digress.

Getting back to that other headshop... In a Salt Lake magazine article by John Pecorelli, a brief history of the Cosmic Aeroplane credits Stephen Jones with opening the business in 1967 as a headshop (the first in Salt Lake City, I'm sure). According to the article, the Cosmic Aeroplane developed a loyal counterculture following:

While Jones’ Cosmic Aeroplane was a good place to find out about bands coming Utah and purchase “imported beads and bells from San Francisco,” the shop, originally located on 900 E. and 900 S., provided a rallying point for Utah’s expanding consciousness until its closure in 1991. Books, used records, underground comix and dope paraphernalia were available, and with a move to larger digs, the Aeroplane opened an experimental theater in back (the Human Ensemble, then featuring KSL news fixture Shelley Osterloh). The larger space also accommodated a draft counseling center run by Hal Sparck, who had frequent legal wrangles with the Selective Service as a result, but always prevailed. 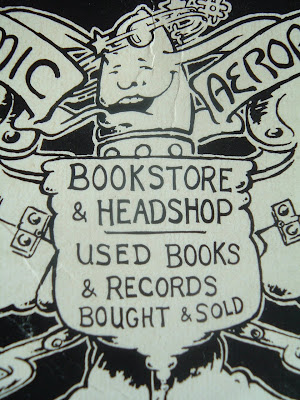 I don't know if books were part of the mix when the place opened, or if they were gradually introduced into the shop's inventory, but in 1977 two new business partners ensured its legacy as a bookstore. Bruce Roberts and rare book dealer Ken Sanders provided an infusion of cash and expertise in books to help the shop blossom into a million-dollar business (at least one year reportedly).

This trade card or business card may be from the Roberts-Sanders era, as the address given is 366 South West Temple and the original location, stated in the quoted passage above, was elsewhere. Regardless, its ancestry boasts of vintage 1960s. But nothing lasts forever. By 1991 the Salt Lake City icon of counterculture and subversive literature and music met its demise, reported here in the Deseret News.
Posted by Chuck Whiting at Friday, August 27, 2010 No comments: