Water receipt from the Nevada Territory 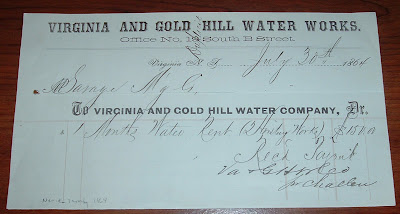 Many of the states in America were first Territories of the United States, or parts of Territories, and later became states. I particularly like finding ephemera that indicate the Territory status for a state, such as the 1864 Nevada billhead above.

This is a receipt from the Virginia and Gold Hill Water Works (payable to the Water Company). Their office was in Virginia, N.T., as noted on the billhead. The N.T., of course, standing for Nevada Territory. Virginia is now Virginia City.

Nevada tried to become a state in 1863, but failed over disagreements about wording in the state constitution that was seen as unfavorable to the mining industry. The 1864 constitution was reworked and approved. On October 31, President Lincoln proclaimed Nevada a state in the United States. A concise history of Nevada's transition to statehood is found here.

As mining operations and the general population increased in the Comstock communities, so too did the water consumption. To keep up with the demand, the Virginia City and Gold Hill Water Company was formed. More interesting history here about the development of the greatest pressurized water system in operation in the world.
Posted by Chuck Whiting at Thursday, February 04, 2010 No comments:


Here's a promotional brochure for the Indy 500 sent out in advance of the 1968 Greatest Spectacle in Racing. Indianapolis Motor Speedway owner Tony Hulman, offers a welcome message on the front page, followed by the history and features of the complex. 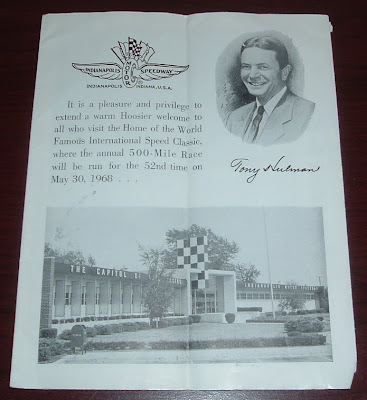 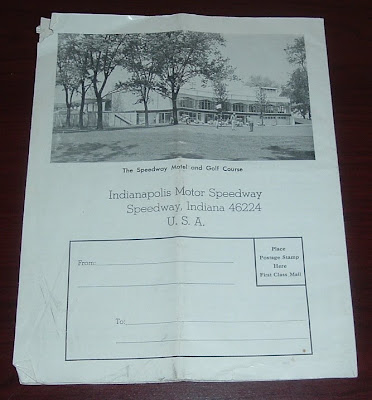 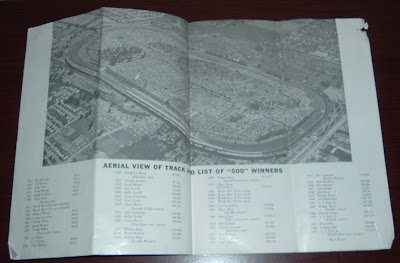 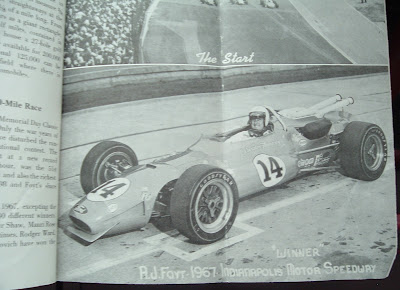 I bought it because we're IndyCar racing fans, but in particular we support the A.J. Foyt Racing team, of which my step-son is a crewmember (mechanic). This brochure features Foyt in his number 14 car, honoring him as the winner, and defending champion, of the 1967 Indy 500. It was his third win at Indy and he would go on to win a record fourth Indy 500 in addition to a many other titles in his long career.

Below are a few momentos from our trip to the Indy 500 in 2008. The Foyt team didn't win, but we had the privilege of going down to the track for a few photo ops. I got to pose with the Borg Warner trophy before the race ceremonies began. And my wife got to kneel on the bricks at the finish line. Maybe this year we'll have a picture of the 14 car crossing the bricks for the win. 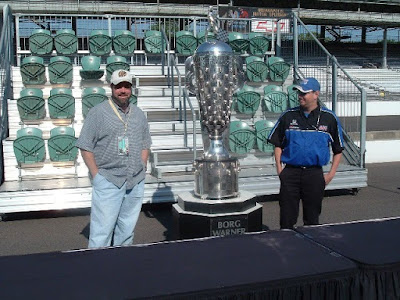 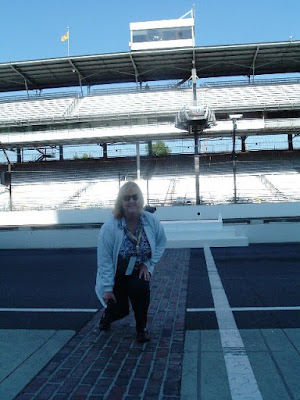