A few words about printed ephemera

I'm cross-posting this from the Bibliophemera blog because it's just as appropriate here as it is there.

Here's a nice descriptive piece about printed ephemera, which I was pleased to receive from William R. Holman. It was a nice surprise and most appreciated. I tried fitting it into the side column for permanent display, as its wordsmithing is most appropriate for this blog. But it just wasn't readable scaled down to fit. So here it is in a regular post, which is better than not sharing it at all. Enjoy! 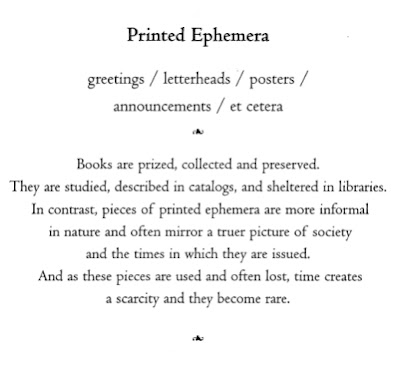 Mr. Holman's memoir, The Orphans' Nine Commandments tells the incredibly poignant story of what a young Oklahoma boy had to overcome during the Great Depression to find success in life as an innovative librarian, award-winning book designer, printer, publisher, and writer.

I feel honored that he shared with me his thoughts about printed ephemera. Thanks again, Bill.
Posted by Chuck Whiting at Sunday, January 31, 2010 No comments: Links to this post


Here is an Eastern Airlines ticket in its original jacket or envelope from the early 1950s (best guess). I've taken nine photos showing the different components in this piece. 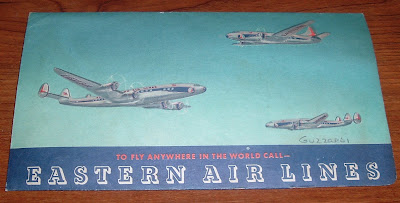 The back shows Eastern's routes and advertises the aircraft by name in the fleet. 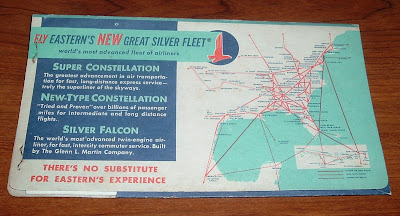 Inside is the actual ticket with no less than four reminders about confirming (or losing!) your reservation, a baggage claim, and an ad for Sinclair Aircraft Oil. 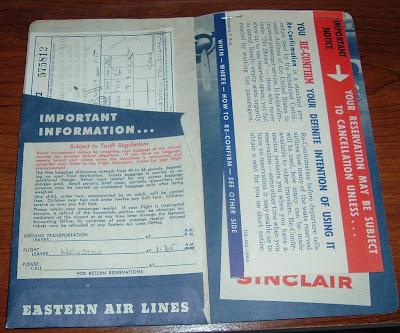 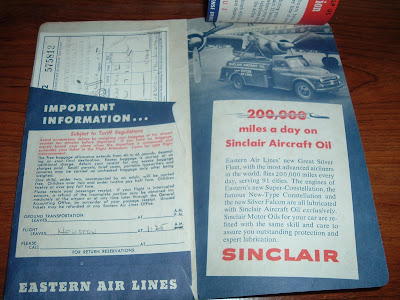 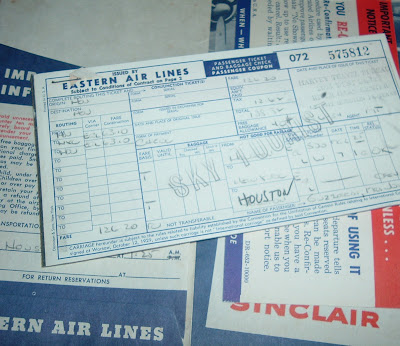 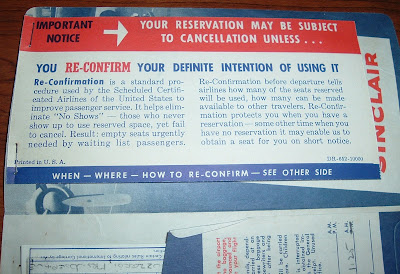 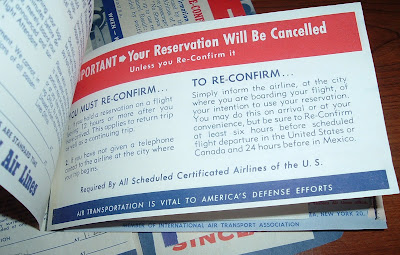 There are three airplanes in the Eastern Airlines fleet featured on this ticket envelope: Super Constellation, New-Type Constellation, and Silver Falcon.

Here's a video of Arthur Godfrey doing a promo for Eastern Airlines, flying in a Super Constellation, circa 1953.

I can remember flying on some of these old birds when I was a small child. My dad liked Eastern so we usually flew Eastern on trips back east from Texas in the late 1950s through 1960s. I always feel a bit nostalgic when I see an old Eastern Airlines piece, which conjures up vacation memories of family members who have long since passed. Hope this will stir a few good memories for others.
Posted by Chuck Whiting at Thursday, January 21, 2010 No comments: Links to this post


The alliterative title sounded catchy in my head, but my first choice was to just use the company's name--E.H. Myers & Co. And they were actually pork and beef packers, as the subtitle in their name indicates on their billhead below. 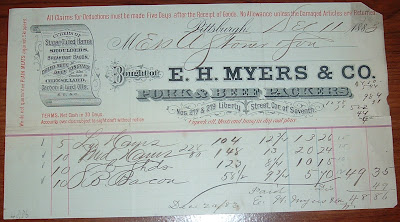 The banner at the left of this billhead informs customers of the day that they also were curers of hams (sugar cured), shoulders, breakfast bacon, dried beef, and beef tongues. Additionally, they were also dealers in cheese lard and carbon and lard oils. 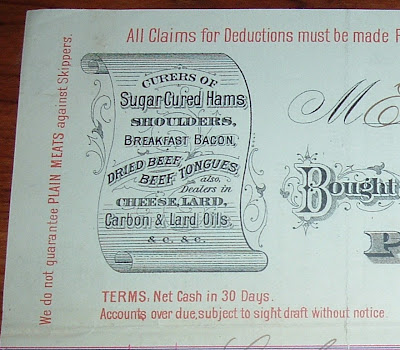 The fine print in red ink to the left of the banner, running vertically alongside the banner, makes a curious (to me) statement: We do not guarantee PLAIN MEATS against Skippers. Plain meats is in caps for emphasis. Skippers is capitalized as a proper noun would be. That's too interesting to not research, so I did. 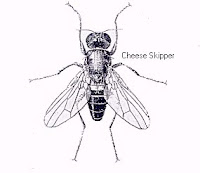 Anyone who has cured hams or bacon would know about this, I guess. I've never done it and knew nothing about skippers. According to information I found at pestproducts.com, skippers are insects, or pests, that look like flies and feed off moldy cheese or slightly putrid meats like hams. They are commonly called cheese skippers or ham skippers. The image here is what E.H. Myers & Co. wouldn't guarantee their meats against.

The backside of this billhead has an interesting piece of writing. It's dated January 1st, 1882 and contains the rules adopted by the Pork Packers of Pittsburgh. 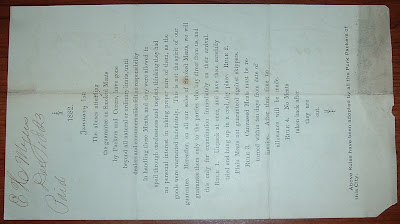 Apparently, the guarantees on smoked and cured meats had been abused by both sellers and buyers of meats in Pittsburgh so much that the handling of these meats had deteriorate into neglect and carelessness under the assumption of unlimited warranty. Therefore, certain rules of guarantee were put into place to protect both the seller and buyer.

The first two rules about inspecting and hanging in a cool, dry place and plain meats not being guaranteed against Skippers are also reiterated on the front side of the billhead. Rules 3 and 4 concern the conditions of returns. 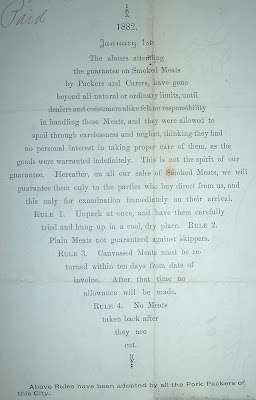 Living in the litigious society of today, I wonder if in 1882 lawsuits may have played a role in the conditions and rules being stated on company correspondence such as this billhead. More likely, at that time, the clarifications and caveats had more to do with angry customers and bottom line.


If I were to make New Year's resolutions, which I don't do, one of them would be to post more on this blog. It's the runt of the litter of three blogs I maintain. It got started later than the others and usually gets pushed aside when I'm rationing out writing time for the blogs.

So for the first post of the new year, here's a winter-related item--a billhead for a company that manufactured sleigh robes, among other driving goods for sleighs and, I would assume, carriages. 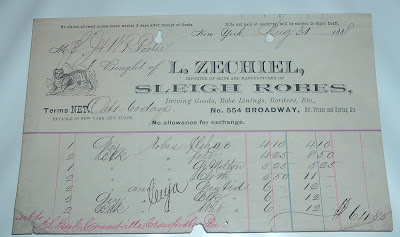 Nothing too fancy on this billhead, but I was interested in the product. I had never heard the term "sleigh robe" before, so I did a little digging.

This would have been a timely post before Christmas, but...

Dashing through the snow,
in a one-horse open sleigh...

Jingle bells, jingle bells,
Jingle all the way;
Oh! what fun it is to ride
In a one-horse open sleigh!

No references to Christmas, just a ride in the cold and snow. So how did those folks keep warm in that open sleigh dashing through the snow? With sleigh robes, of course. Heavy, warm blankets of animal hides from buffalo, bears, cows, horses, beaver, or whatever got the job done. In the early days, more plentiful animals were used like beaver, bear and buffalo. I've read accounts of raccoon furs being used also.

L. Zechiel, located at 554 Broadway in New York City, is the company on the billhead. The date of the transaction is Aug. 31, 1888. As the small print under the company name indicates, L. Zechiel imported animal skins for making sleigh robes. And as the animal graphic on the billhead indicates, some pretty exotic skins were imported for more discriminating tastes in keeping warm in open sleighs. The company used the image of what appears to be a tiger on their billhead. A tiger hide sleigh robe? I hope not, but back then who knows. Probably. 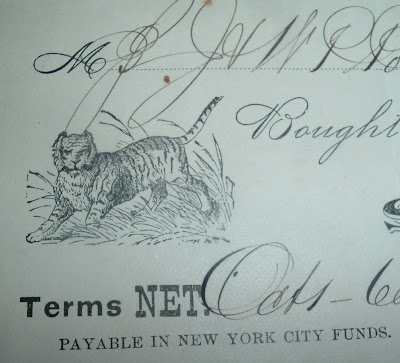 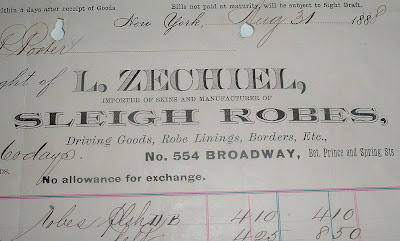 Growing up in Texas and in the latter half of the twentieth century, I had never heard of a sleigh robe, but I guess I should have. I have an old 1920s photograph of my grandfather driving a sleigh in New Hampshire, taking some of the family down off the hill where they lived to the state road where they could have gotten into a car and been on their way. For the sleigh ride, they must have kept warm with a heavy blanket or old sleigh robe.

Also, my wife and I opted for a buggy ride in New York one chilly night after a Broadway show instead of walking in the cold air back to our hotel. I remember now that the driver covered us in a thick, warm blanket for the ride, as the temperature had dropped into the 30s. A modern day sleigh robe, I suppose. I don't recall any orange stripes or exotic patterns.

Curious about what business might now occupy 554 Broadway, I typed the address into a Google search and came up with Banana Republic at 552-554 Broadway in NY. Talk about opposite ends of the retail spectrum. I'd be willing to bet all I have that you can't buy a sleigh robe today at Banana Republic.
Posted by Chuck Whiting at Thursday, January 14, 2010 2 comments: Links to this post