Browsing the Ephemera Society of America site today, I found an article about an interesting collection that focuses on 9/11. From an ephemera standpoint, you can't get any more topical than that on the this day, the eighth anniversary of the September 11 attacks. 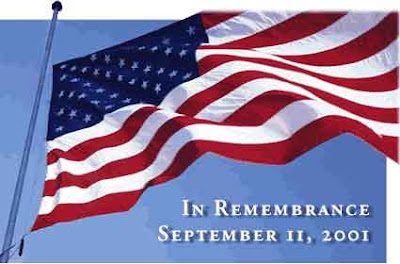 Michael Ragsdale is the collector. The article originally appeared in the Northeast Journal of Antiques & Art. and provides links to a 9/11 digital archive that includes the Michael Ragsdale Flyer Collection.
Posted by Chuck Whiting at Friday, September 11, 2009 No comments: 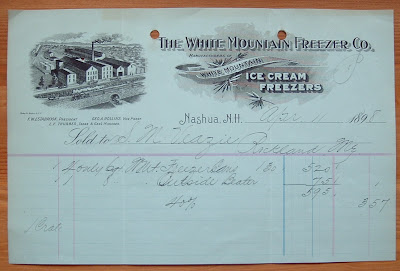 I've been in a New Hampshire state of mind the last several days after talking with friends about vacationing there and after reading Donald Hall's memoir from last year, Unpacking the Boxes: A Memoir of a Life in Poetry.

Donald Hall served as Poet Laureate of the United States from 2006 to 2007 and hails from New Hampshire (by way of Connecticut and Michigan), where he's lived and worked at his craft on his grandparents' farm for the last 35 years or so. I like Mr. Hall's poetry, but his essays rooted in New Hampshire and his personal landscape are my favorite (Seasons at Eagle Pond, Here at Eagle Pond). And I recently found a "lost" letter I received from him about 15 years ago (subject for another blog later).

Anyway, all this had me thinking NH and I remembered an old billhead I plucked off ebay a year or two back. It's from the White Mountain Freezer Co., manufacturers of White Mountain Ice Cream Freezers. 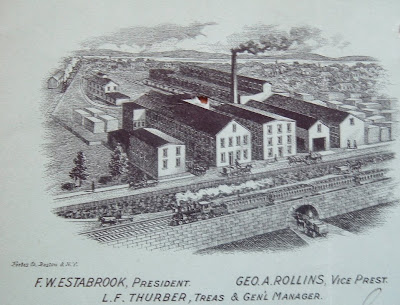 The billhead is dated April 11, 1898 and the officers of the company are listed as F.W. Estabrook, President; George A. Rollins, Vice President; and L.F. Thurber, Treasurer and General Manager. The company was located in Nashua, New Hampshire.

As for the company's history, hats off to Sam Streubel who blogged about the company and its history here. I was mildly disappointed to learn from his research that the company left New Hampshire, home to the White Mountains, in 1963, having been purchased by the Alaska Freezer Company. That they had begun in Laconia, New Hampshire in 1872 and stayed there nearly a hundred years counts for something where longevity is concerned. And they didn't move too far from Nashua. The buyout resulted in their relocation south to neighboring state Massachusetts. 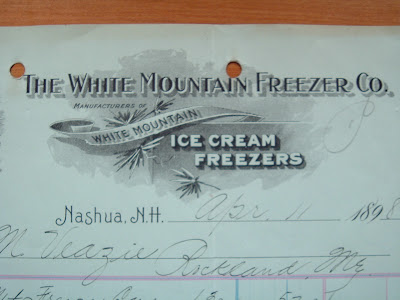 The company was shuttled through several other owners in the next 40 years or so and, like everything else it seems, their ice cream freezer is now being made in China. That was very disappointing to read. Streubel also reports that complaints about the ice cream maker have surfaced since the manufacturing end of the product moved overseas.

I bought my dad one (he an ex-pat from New Hampshire) in the mid-1980s, so I know it was made in the good ol' USA. And I can personally attest to the quality of that ice cream maker, not to mention the ice cream it makes!

And if you happen to like these old ice cream freezers, or maybe even collect the White Mountain and others, you'll want to visit this site if you haven't already. 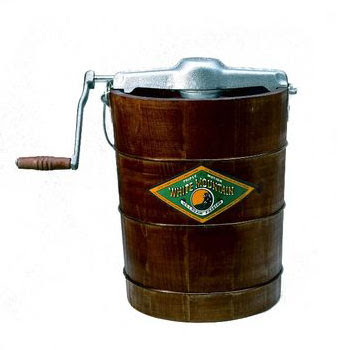